Before the 1980s, lead was a popular material used in lead-based paint, buildings, gasoline, batteries, and even pesticides. As these materials age and deteriorate the lead in the material settles into the surrounding soils. Unlike other pollutants, lead remains in the soil for centuries. The lead in your soil could be from paint used in the 1970s or legacy contamination from the early industrial revolution.
The only way to make sure your soil is safe to garden in and your plants are safe to eat is with a soil test. Knowing the history of your property can help to assess which areas would be lowest risk to place a garden. Sites near old barns or buildings once coated in lead-based paint, over former dump sites, or beside busy roadways are all areas to avoid placing a garden to reduce your risk. If your site does have areas of higher contamination concern, it is recommended to have several soil samples analyzed to get a more accurate result of which areas are most contaminated.

Historically, Portland’s Bayside, Parkside and the West End neighborhoods were impacted by the Great Fire of 1866 which burned down a third of Portland’s peninsula. Debris from the fire became the foundation of the Bayside neighborhood and ash from the fire settled into the soil throughout the area.

In 2007, Eileen Burk, an environmental scientist at the University of Southern Maine collected over 100 soil samples abutting the foundation of houses in Portland’s Bayside, Parkside and the West End neighborhoods to test for lead contamination. On average 91% of soil samples had lead levels over the critical limit of 400 ppm.

The Cumberland County Soil & Water Conservation District (CCSWCD) is currently testing soil from gardens within the same area that Burk focused on in 2007, for a project funded by the Environmental Protection Agency (EPA). To date 34 garden soil samples have been analyzed and 29% have yielded results over 400ppm. The second phase of this project will also include plant tissue samples to determine how much lead different plant types actually draw into the parts that we eat.

The natural concentration of lead in Maine’s soil is around 50 parts per million (ppm). It is safe to garden is soil with up to 100 ppm lead. The Environmental Protection Agency recommends washing produce thoroughly and washing your hands after gardening. With lead concentrations between 100 and 400 ppm, do not grow root vegetables or leafy greens directly in the ground. Only grow fruiting plants such as tomatoes, berry bushes, and apple trees. If your soil has more than 400 ppm lead, only garden in raised beds or container gardens filled with clean soil. Keep children away from bare soil, wear gloves when gardening, and leave shoes outdoors to avoid bringing soil dust inside. It is unsafe to consume produce grow directly in soil with more than 400 parts per million of lead. Children and pregnant women are of particular risk for lead poisoning and it is important to note that there is not safe level of lead exposure for children under the age of 6.

The University of Maine’s Analytical Lab and Maine Soil testing service analyzes soil for a variety of parameters for all soil collected in Maine. You can request a free soil test kit on their website. The CCSWCD and the University of Maine Cooperative Extension are great resources for more information and are happy to answer any questions. Multilingual factsheets on soil lead can be found on CCSWCD’s website.
In addition, CCSWCD is providing free soil tests 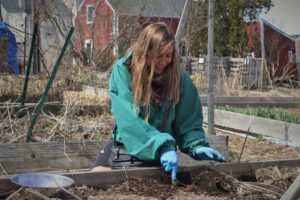 The Risk of Lead Contaminated Soils

a. What’s in your garden soil?
Source of contamination
Before the 1980s, lead was a popular material used in lead-based paint, buildings, gasoline, batteries, and even pesticides. If your garden is at the site of an old barn, a former dump site, beside a popular roadway, near a historic factory or really any number of other scenarios, your soil could be contaminated with lead. Unlike many other pollutants, lead contamination will remain in the soil for centuries meaning lead in your soil could be legacy contamination from the early industrial revolution or from the 1970s. The only way to make sure your soil is safe is with a soil test.

b. Lead in Portland’s Soils
In 2007, Eileen Burk, an environmental scientist at the University of Southern Maine, collected over 100 soil samples from Bayside, Parkside and the West End in Portland to test for lead contamination. over critical limit of 400 ppm. Safety precautions need to be taken to keep yourself from

Exposure to lead in soil

Exposure leads to lead poisoning. Children under the age of 6 and pregnant women are particularly at risk.

c. What should you do?
How to get your soil tested

The natural concentration of lead in Maine’s soil is around 50 parts per million (ppm). Soil containing up to 100 ppm lead is not considered hazardous for gardening. When gardening in soil with up to 100 ppm of lead, the experts at the Environmental Protection Agency (EPA) recommend adhering to “best gardening practices,” including washing produce thoroughly and washing your hands after gardening. Concentrations of soil lead between 100 and 400 ppm are categorized as “moderate” contamination. The Environmental Protection Agency defines 400 ppm as a critical limit for home gardeners, meaning it is not considered safe to consume produce grow in soil with more than 400 parts per million of lead.
The University of Maine’s Analytical Lab and Maine Soil testing service offers a variety of soil tests for Maine residents. You can request a free soil test kit on their website. Additionally, the Cumberland County Soil & Water Conservation District is providing free soil tests to gardeners and anyone interested in gardening in Bayside, East Bayside, Parkside, or the West End. 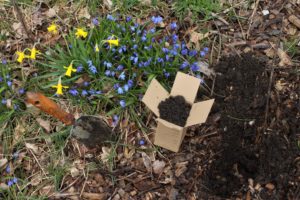 Portland is a high risk area for lead contaminated soils due to the city’s long industrial history and the series of 19th century fires
Before the 1970s, lead was used everywhere – in paint, gasoline, pesticides, building materials, pipes, batteries
Debris from the fires was pushed into the Back Cove and now underlies much of Bayside and East Bayside

Tell me more about lead in soil
Lead is the most common contaminant in urban soils
Once soil is contaminated with lead, it doesn’t go away – that is why it’s so prolific
Lead contamination in your soil could be legacy lead from the beginning of the industrial revolution or from leaded gasoline used in the 1970s.
Unlike many other pollutants, lead doesn’t break down because it is a metal
Lead concentration can change drastically within a single block b/c it doesn’t move all that much
Four categories of lead concentrations
Normal background levels – less than 100 ppm is not concerning
Moderate contamination – 100 – 400 ppm
we recommend gardening in raised beds
avoid leafy greens and root veggies when planting in the ground, only plant fruiting plants
implement good gardening practices (wash hands, wash produce thoroughly, ect.)
avoid ingesting soil (particularly with small children, includes washing produce)
Above 400 ppm is the critical limit defined by the EPA
High contamination – 400 – 1200 ppm
Very High contamination – Over 1200 ppm

Remediation
Focuses on protection from lead contaminated soil
Cover soil with 6-8 inches of mulch
spinach (Spinacea oleracea), sunflowers (Helianthus annus), and Indian mustard (Brassica juncea) as phytoaccumulators for lead
if using phytoremediation, other measures are needed to prevent exposure to the soil 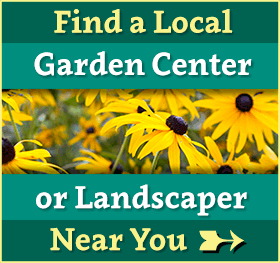 Care and Feeding
Plant in full sun. Sunflowers are drought-resistant, but they'll grow better if you water regularly from the time the flowers begin to develop until they're mature. Thriving in most soils, these flowers will become massive if given ample fertility, space and water. Harvest blossoms for continued flowering.

Fruition has hand-selected this variety to have a brilliant diversity of colors with dozens of gorgeous, petals on each blossom.

Care and Feeding
Plant in full sun to partial shade. Easy to grow and remarkably drought tolerant, calendula also thrives in containers and will readily naturalize when let go to seed.

Care and Feeding
Plant in full sun. Expect 65-75 days to maturity. Dara has an exceptionally long vase life; harvest when 80% of an umbel's flowers are open & no pollen has shed. Enjoy 7-15 heads per plant on swaying 35-50" stalks.

Transplant Only: Sow 4 weeks before last frost shallowly, 2 seeds per cell and thin to 1, keeping soil surface moist until emergence. Transplant to larger containers when true leaves appear. Harden off and transplant outside when the danger of frost has passed with 12" between plants. Deadhead for blossoms all season.

Care and Feeding
Direct Seed (recommended): After final frost, sow every 8" and thin to one every ~2'. Light required to germ, so barely cover seed. Full sun is best. Any (even poor) soil is suitable. Harvest flowers when 90% open for bouquets.
Transplant: Sow indoors 2-3 weeks before last frost, transplanting after frost with spacing below.

Transplant: Shallowly sow 4 weeks before transplanting after last frost at below spacing. Transplant your cosmos for earlier blooms and more full-size plants per pack; direct sow for blooms throughout the season and simplicity of sowing.